It’s the final night of my Ocular Octoberfest – and Happy Halloween to everyone still following!

But really, how could an entire month bloated with beholder brainstorming be complete…without the gibbering god of the beholders herself, The Great Mother.

The Great Mother is the creator and racial deity of beholders in previous editions of D&D. In 5e their origins are claimed to be unknown, which suits them well, but I wanted to bring her back anyway. The Great Mother is a vast entity of unfathomable knowledge and power which she shares with no one – the beholders believe her to be a pinnacle to aspire to, a gibbering idiot-god so bloated with knowledge and power that she treats nearly everything as food to be consumed or to ignore.

When she manifests, it is usually as a positively titanic beholder, constantly drooling acidic slime and able to regrow her eye stalks instantly (even on the inside of her body). Each beholder believes it is her true descendant, but the truth is her form shifts and bubbles constantly, her coloration and flesh changing with her whims and her reality-warping aura.

It is due to this that some speculate she is in a constant state of dreaming and wakefulness at the same time. Perhaps this is how she maintains her impossibly vast wisdom and perceives so much of the universe. At the least it explains why she answers no faithful, even her own children, and lives by truly incomprehensible goals and machinations.

Her lair in the Far Realm is called the Realm of a Million Eyes, a place so dangerous even the most powerful beings fear to tread it. The horrid abominations she perpetually births engage in survival of the fittest, a constant cycle of consumption and evolution, all under her countless watchful eyes. It is telling that when the illithid discovered this place, they launched a massive assault resulting in terrible losses, calling it “the source of all corruption and foulness.”

Here she is – so massive I couldn’t even fit her on a single page. I hope to add lair actions and a “birthing” mechanic (ick) at some point: 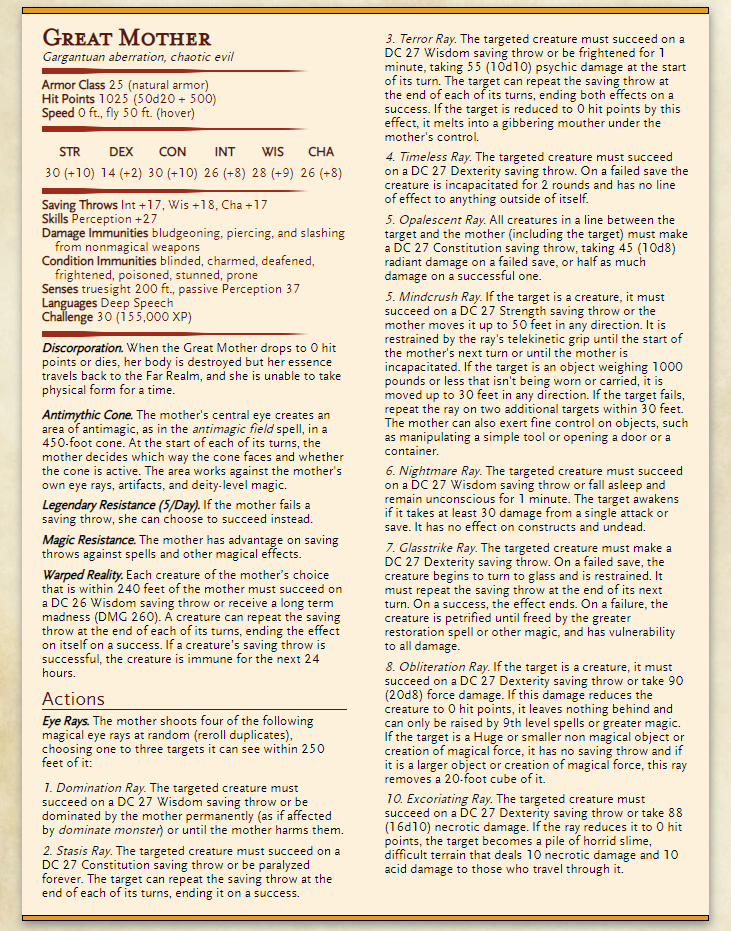